Popular conceptions of narrative are fundamentally wrong. But this doesn’t mean some narratives aren’t more enduring than others. Here are our favourites for branding.

Previously, we discussed universal narratives. Despite what you may have read, they don’t exist. Campbell believed the Monomyth was universal, but no culture is “pristine”. What he thought were familiar stories from untouched cultures were all part of a vast cultural web, with Western Civilisation at the centre. Booker thinks his seven plots follow Jung’s “ancient riverbeds” of the mind. But Jung’s idea of “hardwired culture” is part of the same pseudoscience that bought us Nazi eugenics. So we’re not huge fans.

The good news is that you and I share the same culture. It is the most successful culture in the history of the known universe, and its narratives are everywhere. In fact, the previous sentence is one of them. Funny, that.

There’s more good news: We’ve done the research for you. The Narrative Typology Table, v2.0 below, will help you decide not just what your brand stands for, but what it stands against, and what you can watch as homework.

We’ve taken the most enduring narratives of Western Civilisation and tabulated them to show how they can tell your brand’s story. These aren’t the only narratives around. They are the most tenacious and applicable. If you use them as the frame your brand’s identity, nobody can miss the message.

On the next page, we include the latest version of our table of narratives: 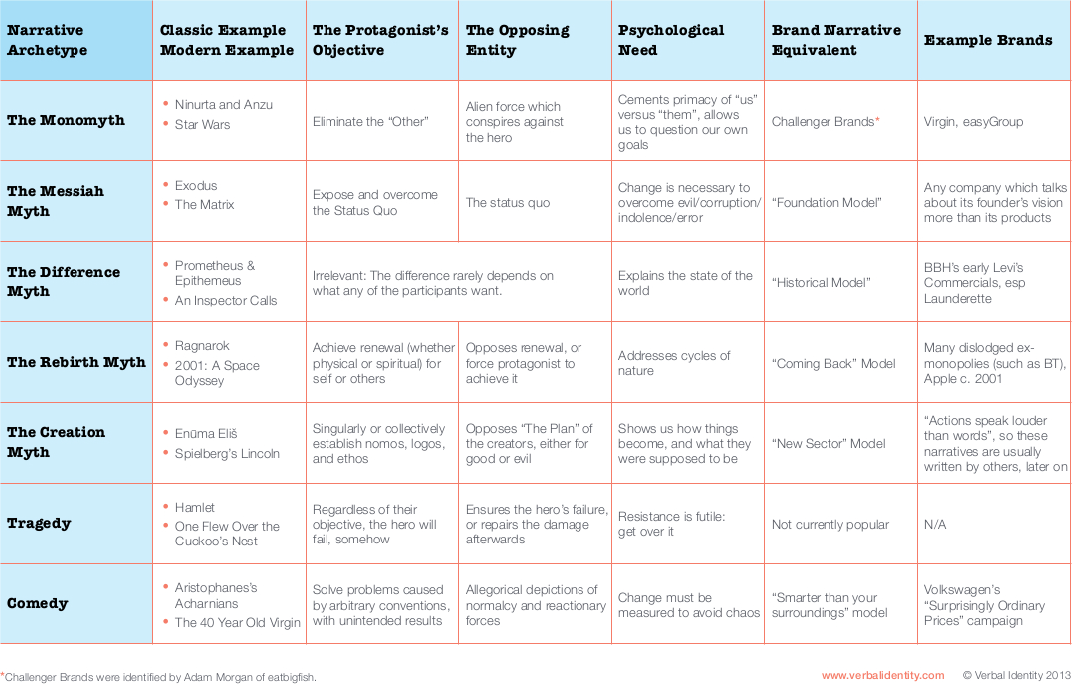 If you’re interested in applying the power of narrative to your brand, take a look at the table, and then contact Chris at yowesty@verbalidentity.com or 07798 772 298.

If you’ve been affected by any of the issues raised in this blog post, email me atlogopolis@verbalidentity.com to discuss the finer points of narratology in detail.

About the Author: Josh is an analyst and brand copywriter at Verbal Identity. He is a trained linguist, with an MPhil from Oxford in the study of Pre-Classical Iraq. He has written extensively on the development of narratives in the earliest periods of recorded history. So he does know what he’s talking about. Honest.