Fred Perry: What is a brand book really for? 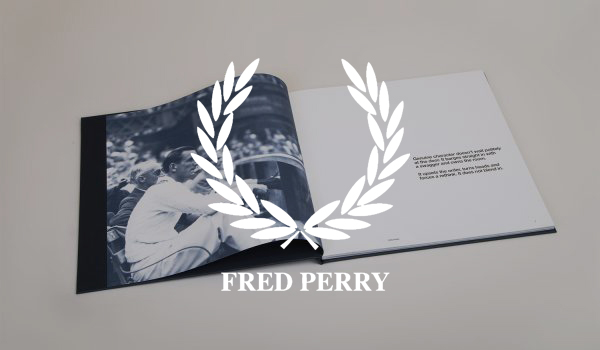 Industry: Luxury and Fashion
Size: Global
Challenge: Form a brand book to convey the heart of the story to partners.

Rob Gaitt, the Brand Director at Fred Perry, saw an opportunity to capture all the history and attitude of the brand in a brand book.

What none of us saw was how this book would go on to win business, be self-funding and inspire people all over the world.

The man, the fans, the brand

The original Fred Perry was Wimbledon Champion three times, he managed to upset the establishment just as frequently, and then left Britain to woo Hollywood. Along the way, he founded one of the world’s iconic sportswear brands, which grew into the leisurewear brand worn by iconoclastic sub-culture tribes ever since.  It’s fair to say that the fans of the brand feel that they are co-owners.  You mess with the brand at your peril.

When we talked with the brand guardians, we realised that Fred’s spirit is still the inspiration for the brand and that’s what people love. The book couldn’t be limited to the basic building blocks of the brand. Instead, it had to capture the spirit of the brand and the pride of its wearers.

More than that, the book had to be produced in a way that reflected the esteem in which the brand is held.

Verbal Identity developed the book over multiple sessions, working closely with both the brand team and the product team. We delved into the archives and the folklore (we were also lucky enough to have a true Northern Soul fan in our writing team), created the sections, content, flow, and wrote the copy.

There’s obvious success. And there’s something way beyond the obvious.

Rob launched the Fred Perry brand book at the brand’s 2015 AGM. Some of the text was picked up and used by the CEO in his keynote speech. The copy and the imagery from the book were all around the hall.

So, the book achieved its obvious goal of capturing the spirit of the brand for people involved in its marketing. But then something odd started to happen…the book released the pent up love for the brand.

Quickly, repeat orders started coming in from overseas offices and another print run was soon fully subscribed (and paid for).

Other stories started emerging: a particular distributor who has just one outlet in his territory ordered multiple copies, so he could leave them in the cool hotel round the corner from his store.

Best of all, we heard of an ‘interesting’ moment in a discussion between a senior member of the Fred Perry staff and the head of a world-famous department store. They were discussing how much space the store should give the brand. The brand book was brought out and gently handed across the desk. There was silence as the department store head leaned further and further into the book (and the brand).  Five minutes’ later, a new, larger in-store footprint for the brand was agreed.