Belstaff: re-positioning a British Brand in the global market

Results:
1 meeting only led to CEO and Board approval of worldwide roll-out of the new strategy.

Damian Mould, the CMO of Belstaff, knew that his brand’s story needed to be as clear to the junior copywriter in Caracas as to the Head of Sales in London. The brand had recently changed ownership and he was reviewing its global positioning strategy. Damian needed to present this new positioning to both the investment board and the leadership team in 6 weeks.

He asked us to distil what was in Belstaff’s DNA, and identify what set it apart from its competitors in the luxury fashion market.

What does British mean?

Belstaff is a legendary British fashion brand with humble roots. The challenge was to understand how its humble heritage could mean something to a modern, global – and luxury-obsessed –  audience. 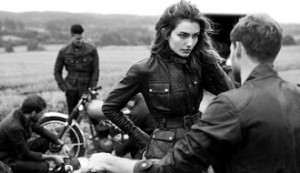 Over the course of two intensive weeks, we interviewed the leadership team: the CEO, the President of Worldwide Sales, the Head of Human Resources, the Global Marketing Director and the VP of Design for both menswear and womenswear, as well as other key team members. We also visited stores and carried out extensive market research.

Then we created a model of the luxury market and mapped Belstaff’s strengths against competitors.

This enabled the whole team to see clearly the space that Belstaff could own.

It’s not about motorbikes, it’s about motion

Belstaff has created iconic clothing for bikers and soldiers since 1924, but this alone wasn’t enough to differentiate it from its competitors.

When we reviewed the presentation with the team, we identified one unspoken truth about the main competitors’ clothing:  people were expected to stand still in it, as the British weather lashed against them. Belstaff’s interest in motion meant they had a more powerful appeal: in a Belstaff, you were expected to be active and all its product features were true to that.

This small insight led to a bigger insight.

What unites Belstaff’s customers (past and present), and differentiates them from other brands’ customers, is their desire to live a life in motion.

The board approved this new positioning in a single meeting and Damian, the CEO and the HR leadership are now rolling this positioning out throughout the company.