How to write so bad news doesn’t sound worse.

Started talking about the ‘I’ word yet?
(Hint: 9 letters.
Which is equal to the % rate it’s now running at.)

It’s time to relearn how to write those tricky emails to customers.
Find a way to talk about price rises.
And do it without hurting your brand.

Writing can’t make bad news sound like good news.
But it can make it sound reasonable.
Octopus recently showed how: 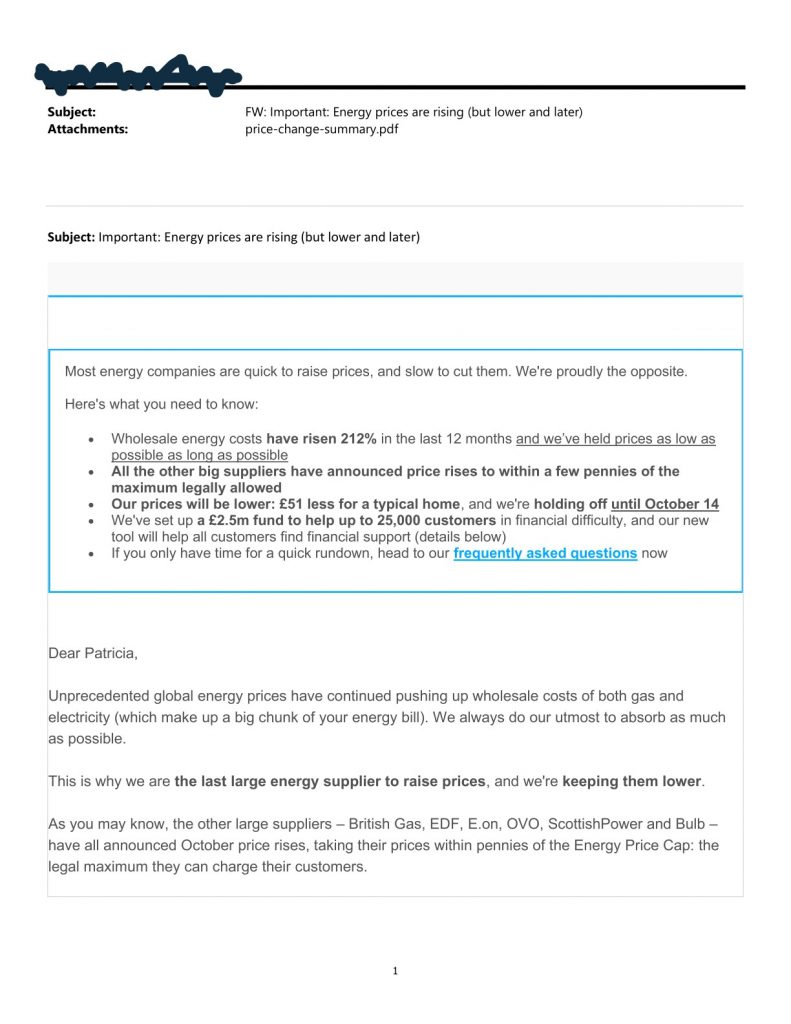 How did they do it?

Give a F—
Most people read a book from front to back.
They don’t read emails like that.
They read all the first line.
Jump to a sub-head halfway down the page.
Then read a bit of the rest to make sure they’re not missing anything.
If you have something important to say, put it up front and big.
In Octopus’ case they did.
And they branded it by stating their worldview in a branded voice:
“Most energy companies are quick to raise prices, slow to cut them. We’re proudly the opposite”. 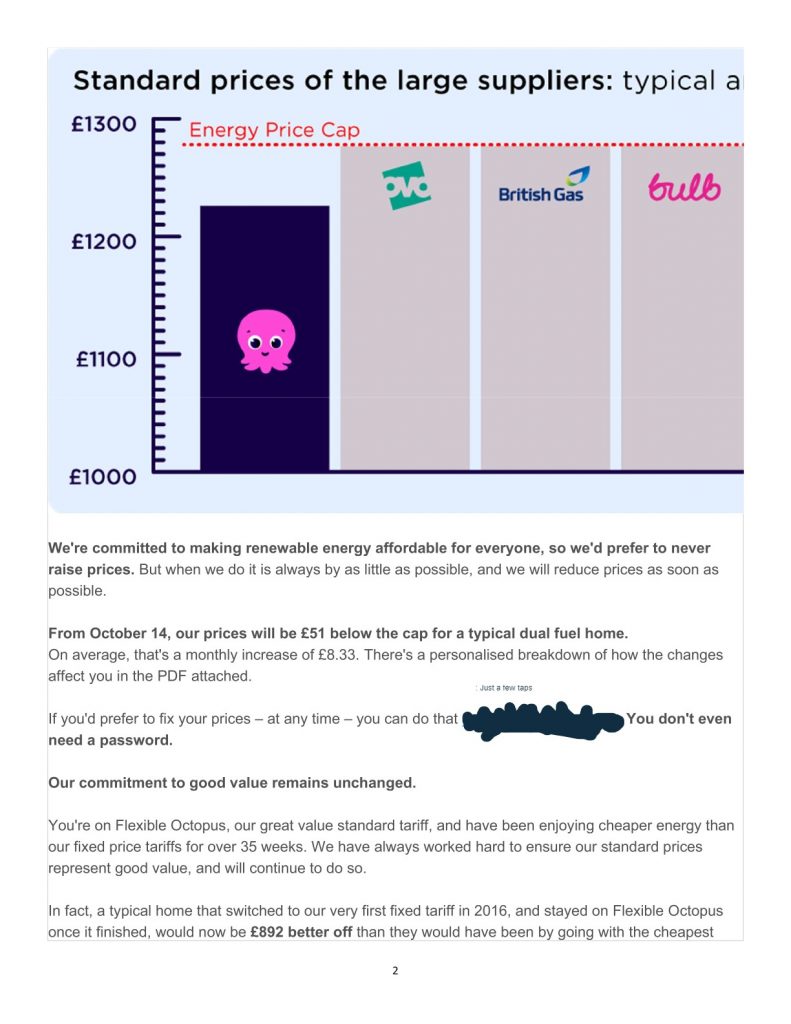 Visuals attract. Verbals engage.
At Verbal Identity, we’re super-specialists in the power of language.
Even so, we won’t deny the work done by the visuals in the email.
But have you ever noticed what happens at galleries?
People walk into the Clore Gallery and are struck by Turner’s Shipwreck.
What do they do then? 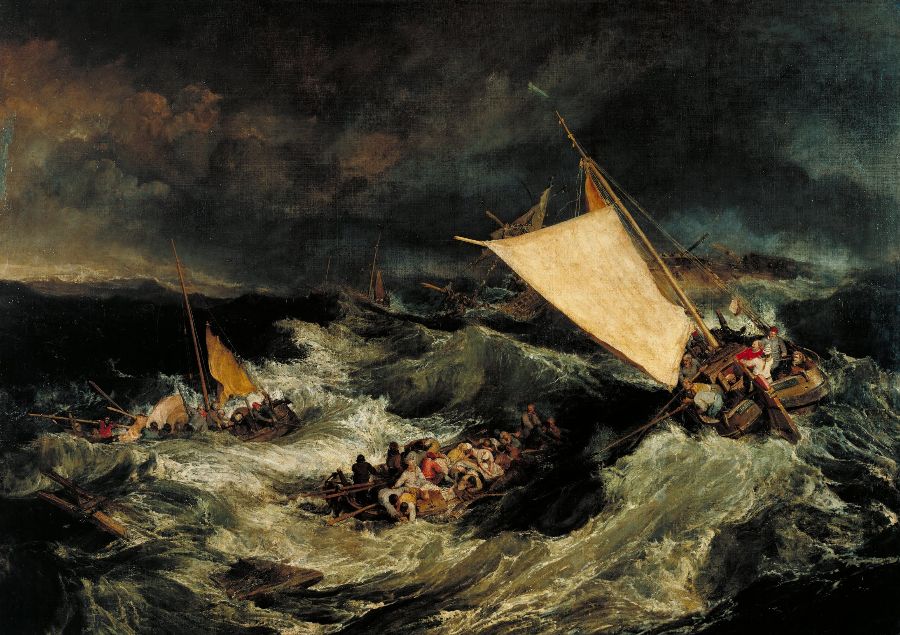 People walk right up to the giant canvas.
Then lean away from it.
And read what the curator has to say about it on the little plaque on the side.

The stronger your visuals, the harder your language has to work.
When your visuals have done their job, you’ve got people’s attention.
Once you’ve got their attention, it’s time to pay back by engaging them.
(It’s one of the things we think Performance Marketing might be missing out on.)

Explain. Don’t justify
Brand owners worry some of their customers won’t understand.
They feel like they should stoop, to justify their actions.
Which leaves most customers feeling patronised.
And antagonised.
Say it straight.
Simplicity wins.

More help.
Avoiding a particularly difficult conversation? There’s a book for that.
Kathryn Mannix’s new book is meant for anyone who wants to discuss some of the things in life which are even trickier than price rises. 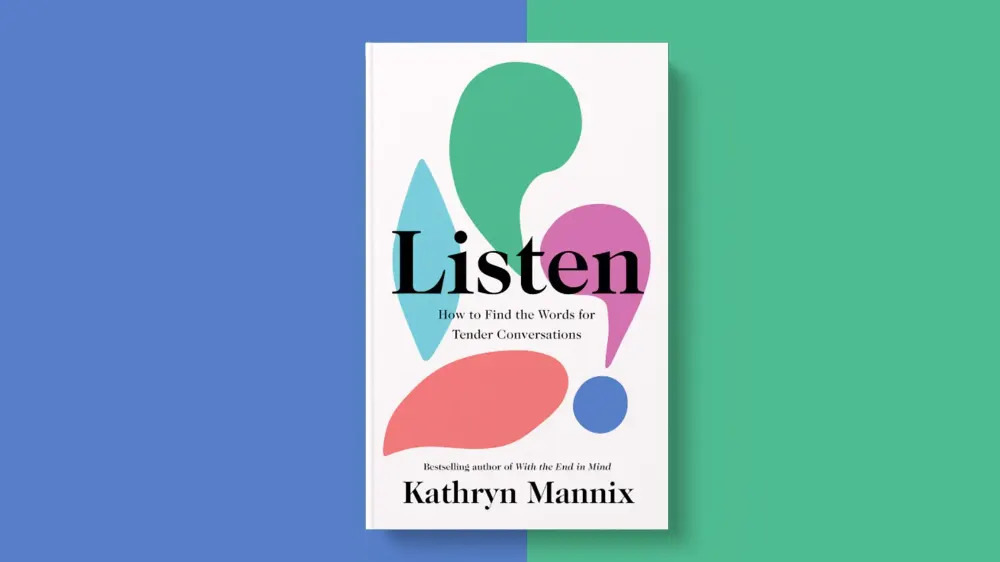 It has some lessons for all of us:
‘Invite, don’t insist’
‘Listen to understand’
‘Be curious, not opinionated’

For those of us at work, a couple of other suggestions are useful:
‘Support, don’t ‘”fix” ‘
‘End on a positive note’

You might well have the best writers in town.
But even the best need some help now and again.
And if you want to help your writers craft that tricky email, there’s a book for that, too: 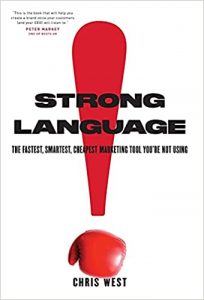 If you’d like a copy and you’re in the States, Barnes and Noble stock it.
If you’re just about anywhere else, there’s Amazon.
And if you’d rather give money to help the people of Ukraine than put more fuel in Jeff Bezos’ rocket, here’s an idea:
Email me for a copy.
I’ll send you a beautifully formatted pdf.
All you do is donate whatever you want for the book (RRP £21.65) to the Red Cross.
That’s a good thing.